There is no more magnificent and awe-inspiring sight, especially at night, than Edinburgh Castle dominating the city of Edinburgh and lighting up the skyline. 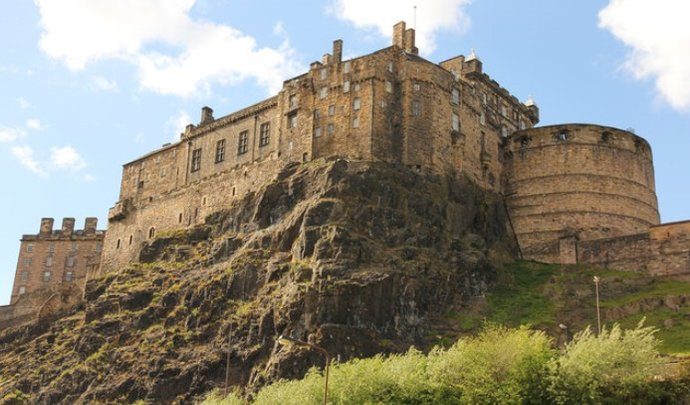 My first visit here was as a schoolboy.

It was magical then, and it still is today.

It was back then that I first heard the story of Greyfriars Bobby, and it could have been this lovely little tale that inspired me to return here many times over the years.

Every time I visited the Castle I found something that interested me, and the same can be said for the whole Royal Mile. Mind you, I had no idea that someday I would be researching and writing about all of this. I am, so here goes …..

Built high upon the remains of an extinct volcano, the Castle provides visitors with impressive views of the city and landscape beyond. It’s one of the oldest and most famous castles in the world, and I was surprised to learn it had been a prison for sailors from many countries during the 18th and 19th centuries. The prisoners included crewmen who sailed with John Paul Jones, founder of the American Navy, and during the Napoleonic Wars, French prisoners were kept in the Castle dungeons.

THE ONE O’CLOCK GUN….

The famous One o’clock Gun fires every day (except Sunday) at precisely 1300 hours. It was originally fired to allow ships in the Firth of Forth to set their clocks accurately. 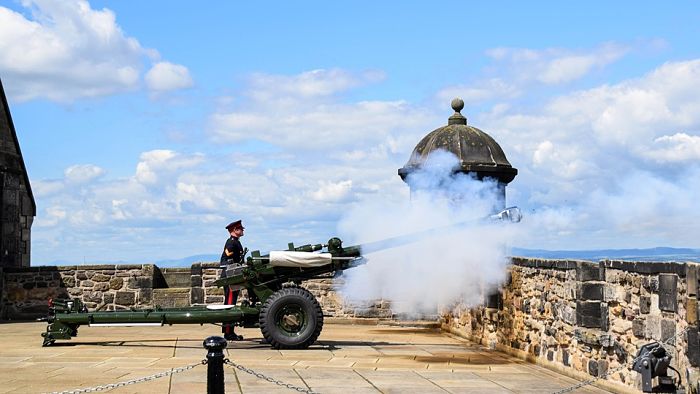 The Castle was besieged many times in the Middle Ages. It was taken by Edward I of England in 1296, and recaptured by Robert Bruce’s valiant nephew Thomas Randolph, Earl of Moray, in 1313, in a daring raid with only 30 men. The English took it back in 1335, but in 1341 Sir William Douglas again removed the invaders.

Over one thousand years of history sit on top of the famous Edinburgh rock, and when you see Edinburgh Castle you will understand why it attracts over a million visitors a year. Listen out for or watch the One O’Clock Gun and see a fascinating display on the history of time guns and timekeeping. Inside the walls is a remarkable fortress and former Royal residence, packed with history. Edinburgh Castle also offers splendid views for you to appreciate the surrounding hills, sea and volcanoes.

Guarding the gate are national heroes Robert the Bruce and William Wallace who both played their individual parts in changing the course of Scottish history. 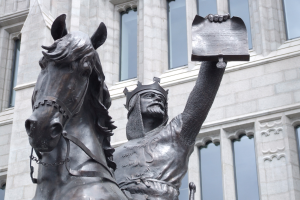 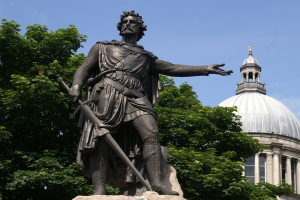 The City of Edinburgh and it’s architectural styles grew outwards from the Castle rock, and the first houses in Edinburgh were built on the area in front of the Castle, which is now known as the Lawnmarket, and then the house building continued down the High Street and The Cannongate towards the Royal Palace of Holyrood House.

A series of spectacular performances known as the Edinburgh Military Tattoo takes place on the Castle Esplanade each year during August. The basis of the performance is a parade of the pipes and drums of the Scottish regiments, but after more than fifty years, the Tattoo has developed a more complex format which includes many invited performers as diverse as (in 2006) a Choir of Ugandan orphans and a Kung Fu troupe. 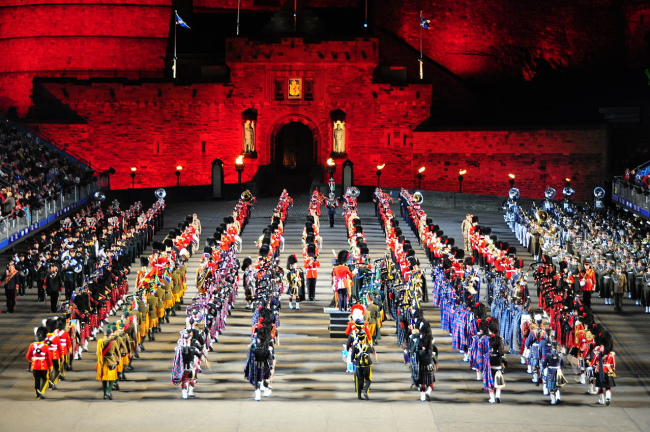 The Tattoo runs for 3 weeks, during Edinburgh’s busy august calendar, that includes the fabulous Edinburgh Fringe Festival, and this is another event not to be missed.

No visit to Edinburgh is complete without a visit to the Castle, and if you venture up to the highest parts of the Castle’s structure, you will be overwhelmed by the spectacular views of the City of Edinburgh afforded from this Scottish “Castle of Castles”.

When you visit the Castle you will probably understand why the early inhabitants of the area made settlements here, in what is now the City of Edinburgh, our capital city.