Long before the rings are exchanged at a traditional Scottish wedding, some of the old customs have been followed with the utmost precision. Hopefully, all goes well. 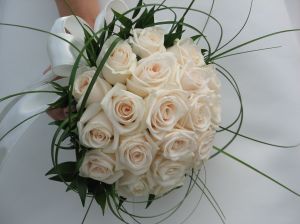 After all the wedding arrangements have been painstakingly made and the big day is fast approaching, it’s time for the stag party and the show of presents or hen party.

Within a few weeks of the wedding day, the groom-to-be will have a stag party with his friends. In keeping with an old custom, this is a way of saying goodbye, but also to give reassurance that friendships are lasting, and won’t end when marriage takes place.

At the end of the stag party, the poor guy will probably find himself tied to a street light somewhere, and, if he’s lucky he’ll maybe get to keep some of his clothes on.

The bride-to-be will have a “show of presents”, usually at her mum’s house. She will invite friends round to view the gifts she has received, and this will probably be followed by a night on the town, or maybe in an exotic location, for her hen party.

And make no mistake, you know a hen party when you see one!

The bride-to-be will likely be in fancy dress, and the whole entourage will converge on the town, singing, dancing, doing a conga through the pubs, banging on pots & pans along the way and having a great time. Mind you, these days Stag & Hen Parties are more likely to be fun-filled adventure weekends in far flung places, in keeping with the fact that they are celebrating their last few days of freedom before getting married.

On the wedding day the bride will look resplendent in her white gown, shoes, veil and tiara, carrying her flower bouquet and possibly a lucky horseshoe. To make her traditional Scottish wedding complete the bride will be wearing something old, something new, something borrowed, and something blue.

The “something old” will most probably be something handed down from her mother to symbolise the passing down of wisdom. The “something new” will be a gift, the “something borrowed” will be from a married couple, for good luck, and “something blue” is usually a blue garter, as a sign of love and modesty.

The groom will cut a dash in his full Highland dress, consisting of the kilt (with clan tartan if applicable) & kilt pin, sporran with chain strap, tartan or white hose, jacket, shirt, bow tie, sgian dhubh (black knife) tucked in the hose, and gillie brogue shoes.

The bridesmaid dresses will have been chosen by the bride, in colours that she feels will compliment her dress, and the best man and the father of the bride will usually be in full Highland dress, making it altogether a pretty colourful affair. 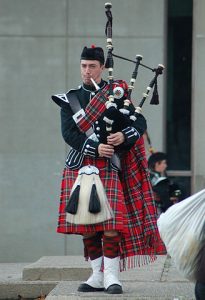 After the happy couple have exchanged vows and said “I do”, the wedding is well underway and ready to move up a gear. It’s time for photographs to be taken and then the bride follows the tradition of tossing her bouquet over her shoulder. If the bouquet is caught by a single woman, she will be the next to marry, according to folklore.

At many of our Scottish weddings there will be a piper at the church door, to lead the bride and groom to their waiting car, and no doubt they will be showered with confetti or flower petals as they make their way.

They go to a location they have chosen for more photographs for the wedding album, and the guests will gather in the reception venue, to await the happy couples’ arrival.

At the reception the bride and groom will cut the wedding cake, and the guests will receive a piece later in the night.

After the wedding meal the usual customary speeches will be made, with toasts beng made to all and sundry, and then it’s down to the serious business of partying well into the wee hours of the morning. The bride and groom will lead off the dancing, and they’re soon joined by the best man dancing with the chief bridesmaid, closely followed by the parents of both the bride and groom, who will swap partners.

The rest of the wedding guests soon join in, and the party is well and truly underway.

Later, the couple change from their wedding wear into something more comfortable, and mingle with their guests. At some point in the evening they will try to make their “getaway” in secret, to begin their honeymoon. At the reception, the party continues long into the night, and many a glass is raised, toasting the bride and groom.

The traditional Scottish wedding reception will likely finish with all present singing “Auld Lang Syne”, but the party? Who knows? It could go on, and on, and on ….

Find A Hotel In Scotland – Different providers, different prices, and user reviews. Save time and money, search them here for the best deal.

Castle Weddings – Imagine the many banquets, stately dinners and balls that have taken place in the great halls of these Castles.

Gretna Green Weddings – Gretna Green is probably the most romantic destination for weddings in Scotland. A favourite place for young lovers.