This is for everyone over sixty, because, like me, you will probably remember these times. Hopefully you have fond memories, despite some of the hardship we faced. 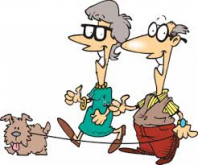 As a child in the fifties, and a teenager in the sixties, I feel very privileged to have grown up in an era that I can only describe as “magical”. And I don’t think I’m exaggerating.

There wasn’t much money around, but we had fun! And much of that “fun” we had to make ourselves! Up until the age of ten I was brought up in a house with no electricity.

We had a gas cooker, a coal fire (a real one), and lighting from a gas mantle. (Do you remember them?) But hey, we were the only house in the close with an inside toilet!

My little sister arrived when I was six, and after four years of living in an overcrowded house, we finally moved to a new one, with electricity, but we got another coal fire.

But now we had a telly! What a treat that was, even though it was black and white!

As kids we walked to and from school … alone. Imagine that!

And as soon as I went into high school, my first job when I got home was to light the coal fire, to heat the house for my mother and father coming home from work.

As soon as that was done, it was out to play, regardless of what the weather was like. 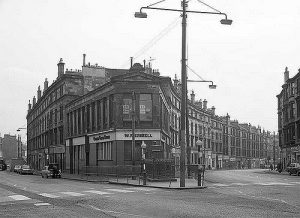 They were great times. There were a lot of kids in the street, and virtually no cars.

The boys played football and the girls were either playing with skipping ropes or hopping on a “bed” that was chalked on the road.

Then we would be called in for tea (which we would gulp down) and we were back outside.

Sometimes the boys and girls joined together to play games like hide and seek, kick the can, aunties & uncles, and many more until the street lights came on.

That’s how it was. Playing with friends was more important than watching TV.

If we got hungry, we shouted up to the window “mam fling me oot a piece!” Mum obliged, she made a sandwich, wrapped it in paper and threw it out the window.

We had too many things to do. Sometimes we would read comics, and then go round our friends’ houses to swap with the ones that they had read. Then bicycles starting appearing when we were a little bit older (I took on a paper round to pay for mine).

Aunts and uncles would visit the house, and we would visit theirs. It seemed we were always going somewhere, and with NO car and NO taxi. It was either a bus or a walk. 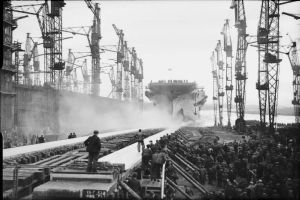 When we left school, most of us walked into a job; the girls went to work in the mill, or a factory, and many of the boys started an apprenticeship in one of the local shipyards. Plus, tradesmen could leave one job on a Friday and start another one on the Monday.

When I look back now, I can’t help wondering how we managed without all the things we take for granted these days.

When you think about it, we had no cars, no phones, no internet, no showers (just a bath), no washing machines or tumble driers, no fridge, and no supermarkets.

But I’m really grateful for OTHER things we didn’t have. We didn’t have house break-ins, in fact nobody would have to break in because we didn’t lock our doors!

We never heard the term “mugging”. We didn’t seem to have much crime at all, or maybe that’s just because we didn’t hear about it as much (from the media).

We lived through the sixties and were part of a great music revolution. Fashion was changing faster than our tea getting cold. We saw history being made as man landed on the moon (?) In the seventies the UK got decimalisation, how much easier is that?

We’ve seen the introduction of colour TV, calculators, mobile phones, the Internet, and lots more. It’s all history now of course, but …..

To Everyone who lived in these times….

Let me say this : I think we all have one thing in common. We were brought up with good values, manners, and respect for others. Even as children, if our ball landed in a neighbour’s garden, we knocked their door and asked if we could have our ball back.

We respected other peoples property, their privacy, and we were happy to run to the shop for a neighbour. We gave up our seat on the bus if an adult was standing.

But we should take a minute to look around us today, and appreciate how much technology has advanced in the last fifty years, and be thankful for what we have now.

We should look at the young ones of today, see their qualities, wish them well, and not judge them too harshly. They were brought up in a different era, and times change.

And most of all, we should think ourselves very fortunate to be what we are, to have done all the things we did, to have seen all the changes we saw ….. and be grateful.