There’s more to Scottish Culture than kilts & bagpipes. As a nation we are proud people. We love being Scottish, we can glorify failure, we never give up, and we don’t take ourselves too seriously. That last sentence almost sums us up, but not quite.

With our remarkable bloody and colourful history, and our diverse culture, is it really any wonder we have an inbred sense of identity? This is in spite of the fact that we are part of the United Kingdom and not an independent country as such.

The Union of the Crowns took place in 1603, with James VI of Scotland becoming James I of England, and the Act of Union on 1st May 1707, united both parliaments, creating the Kingdom of Britain, and effectively ending Scotland’s independence.

So, considering that we are no longer a separate sovereign state, and with no independent membership of the United Nations or the European Union, what is it exactly that constitutes our sense of identity? Well, we have our own legal system, and our own education system which is different from that of England and Wales.

We have our own banking system, and our rail network is managed independently from the rest of the UK. The country also hosts many of its own national sporting competitions, and enjoys independent representation at some major international sporting events like the FIFA World Cup, the Rugby World Cup and Commonwealth Games. Following devolution, a new Scottish Parliament was elected in 1999, with our own Secretary of State becoming a part of the UK Cabinet.

This small country is the northernmost part of the UK, surrounded on three sides by water and having just one land border with England, which runs between the Rivers Tweed (east) and Solway Firth (west). We have around 787 islands, mostly groups which form the Hebrides, the Orkney and the Shetland Islands.

We are well known for our beautiful mountainous scenery and lochs (lakes). Although seemingly tranquil at times, Scotland is a vibrant, exciting country, and home to a wide range of cultures and traditions, not to mention our bloody, and colourful history.

With around 3000 castles, 3000 golf courses, a fabulous collection of museums and galleries, plus a vast range of activities and events, our Scottish culture provides something for people of all ages and interests to explore.

Scottish national dress is the kilt, a wrap around of four yards of tartan with box pleats. Men wear the kilt and sporran, tartan hose, jacket and bonnet, and a sgian dhubh (black knife) tucked in the hose. 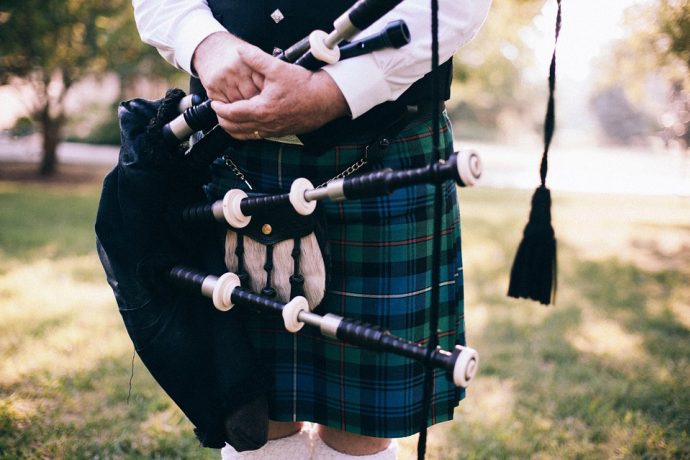 Rarely seen apart from weddings, Burns’ Suppers, other special occasions, and more remote parts of the country, tartan has been associated with clans, but nowadays there are many new tartan designs that have no clan connection whatsoever.

The use of the word “Scotch” referring to all things Scottish was commonplace outwith the country in bygone days, however, the modern use of the term describes only Scottish products, usually food or drink. It’s worth remembering not to refer to us as “Scotch”. We might be offended. We are “Scots” and our nationality is “Scottish” 🙂

Our biggest export is Scotch whisky, well known throughout the world. However in Scotland you will not hear anyone order a “Scotch”. In keeping with Scottish culture, a whisky will be asked for by brand name, or “a whisky”, “a half”, “a dram”, or “a nip”, depending on which part of the country you’re in. A “glass” is a double measure.

Our “other national drink” is Irn Bru, (pronounced Iron Brew) a soft drink which many swear by as a hangover cure. It’s very gassy, and it sure tingles the taste buds. There are some things you must sample when in Scotland, and this is one of them.

Food you must try is Porridge, a dish of boiled oatmeal, usually eaten at breakfast. Porridge should be flavoured with salt during cooking, but some people have been known to use sugar, which is enough to put the wind up the kilt of true Scotsmen.

If you visit, you should also try the Haggis, a wonderful delicacy usually served with potatoes & turnip. Now don’t pay too much attention to the ingredients, they’ll put you off, but if you insist, you can find out how it’s cooked by looking at Scottish Recipes.

Haggis, neeps and tatties (turnip & potatoes) is the traditional fare that is served on ‘Burns Night’ in honour of the birth date of our national poet, Robert Burns, on 25th January. Burns Nights are celebrated not only in Scotland, but all over the world, where there are Scottish connections.

But there is so much more to Scottish culture than Kilts,
Bagpipes, Haggis and Whisky.

Saint Andrew’s day (our patron saint), is celebrated on the 30th November. Read the interesting story of how The Saltire (St Andrew’s Cross) became our national flag. Our national emblem is the Thistle.

There are three officially recognised languages: English, Scots and Scottish Gaelic, although the 2001 UK Census showed that there are only 58,652 Gaelic speakers, out of a population of 5,062,011. You’re most likely to hear Gaelic spoken in the western isles. Mind you, Scotland has a language all of its own, when you consider some of the old Scottish sayings. It’s worth getting to grips with them, the ones that are not so old, and some of our Scottish slang words. One of our slang words is ‘fitba’ meaning football. As a nation we are passionate about our football. See the Fitba Daft page.

This small country has made a significant contribution to the world of creativity and entertainment, and many Scots became famous in the field of invention such as:

Music in Scotland offers something for all tastes, ranging from traditional Celtic music to modern jazz, opera, rock and popular music, and Glasgow boasts Fantastic Nightlife to match any city in Europe. The city also offers some of the best shopping to be found anywhere, and with a superb range of free entry museums, Glasgow has become a magnet for tourists the world over, as has Edinburgh, the capital.

Scottish theatre has been transformed from its old music hall days to a broad spectrum of drama, comedy and dance. Some of our major festivals, although still very much promoting Scottish culture, have a more international look, especially the great Edinburgh Military Tattoo and the equally good Edinburgh Fringe Festival, offering a true cosmopolitan flavour. You can sample true Scottish culture and traditions with the fabulous Highland Games, held all over the country during the summer months.

If you’re in Scotland late December, then make a point of staying for the famous Edinburgh Hogmanay Party, the worlds’ biggest New Year bash. You’re guaranteed a smashing time, but be careful not to get ‘Blootered’ (meaning can be found on the old Scottish Sayings page). Visit us and sample our Scottish culture, our colourful history, our lochs, mountains, and warm hospitality. So please do pay us a visit, if you can.

See the Scotland Travel Information page for all the information you need for travelling to and within Scotland. Helpful advice on passports and visas, currency, weather, holiday extras, useful travel links and much more.