The Fox and Hounds restaurant in Houston, Renfrewshire has been a favourite of Rose and I for a long time. It was always one of our top choices for special occasions. 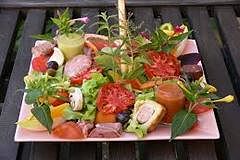 It’s been at least a couple of years since we’ve last been here, so we went along recently to celebrate both our birthdays. (Our birthdays are only three days apart), and it’s not very far for us to travel.

Sadly, it was a bit of a disappointment.

The premises have changed hands since our last visit here, and although the new owners haven’t completely refurbished the place, some parts of the establishment have been given a bit of a makeover, and some of the layout has been changed.

Our first impressions did not do anything to convince us that the surroundings, or the service, had improved. But that would have been difficult, as the “old” restaurant was cosy, and the service first class. Certainly the décor is more modern, but somehow it doesn’t quite fit in with the Fox and Hounds traditional country house setting.

To be honest, the restaurant just looks out of place somewhat, and sad to say, has lost some of its former character, and ambience.

As we entered, there was nobody there to greet us, so we spent an uncomfortable few moments just standing there. It later became apparent that they were understaffed.

Eventually we were shown to our table, ordered drinks, and I have to say the drinks arrived very quickly. Not so with the food. We browsed through the menu and then waited for around 10 minutes before anyone appeared to take our order.

There was only one waiter and one waitress on duty, whizzing back and forth. At one point my gaze shifted to their feet to check if they were wearing roller boots.

I asked for mussels for my starter, and very surprisingly, the waitress said “we had to take them off the menu because they weren’t very nice.” My first thought was “what a good advert for the place.” So I settled for the prawns, and Rose had chicken wings.

Rose liked the chicken wings, my prawns were very bland.

Next up was the main course, and we both had fillet steaks. The steaks were nice, no complaints there, although the trimmings could have been an awful lot better.

For dessert, I had the chocolate fudge cake with ice cream (diet starts next week) and Rose had the apple crumble and cream. Again, no complaints about the food.

By this time they had found some more help, so we didn’t have to wait long between courses. We ordered coffee to finish off, and that’s what we got … coffee. No mints or biscuits with the coffee (which is always a nice touch) but the coffee was nice enough.

The bill for the food, coffees, and 4 soft drinks was £68. Not cheap, but by today’s standards, not overly expensive either. So all in all, I would have to say that the food was ok, but the surroundings and service don’t begin to compare with the “old” place.

I would rate The Fox and Hounds no higher than average, so on our next special occasion we’ll be back at another of our old favourites ……. The Hungry Monk!